Off the Beaten Path: Uncovering the History of the Arboretum’s Azalea Collection

Posted April 30, 2020 By Clara Curtis in Horticulture & Landscape, The Arboretum

Creating a garden is a work over time. It requires interest, drive, concentration, commitment, creativity and even a little luck. The Arboretum’s National Native Azalea Collection certainly embodies all of these traits. It is a dreamy place to wander off the beaten path and escape into a colorful world of wild flowers, butterflies and peaceful streamside views. As we celebrate the Collection’s “peak” this week, I wanted to take a look back and celebrate how this garden came to be. 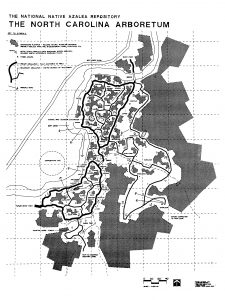 In 1988, the late Dr. John Creech, retired director of the National Arboretum and interim director of The North Carolina Arboretum during its initial formation, called for the development of a national repository for native azaleas at the Arboretum. Dr. Creech suggested that azalea research and field studies conducted by Dr. Henry Skinner, another former director of the National Arboretum and consultant for The North Carolina Arboretum’s development, be used in developing the collection.

Several years later in the early 1990s, former Director of Horticulture Rich Owings and nursery worker Ron Lance called for plants, and together they collected azalea seeds from Gregory Bald, a high natural bald in nearby Great Smoky Mountains National Park. That expedition along with other collected species and cultivated varieties yielded over 60 plants to form the beginning of the Arboretum’s native azalea collection.

In 1992, the first plants were planted on a site along Bent Creek using a plan drawn by landscape architect Fred Blackley. The site offered various microclimates, sandy soils and sunny upland slopes from the stream, which provided the water for establishing the new plantings. Three years later, the American Public Gardens Association awarded the collection through its Plant Collection Network national status, which recognizes standards for excellence in plant collections management and an enduring commitment to global plant conservation. The Arboretum still holds this status today. 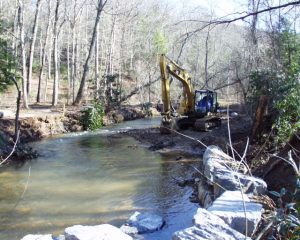 The collection continued to grow and nurserymen began taking seeds each year for propagation ― as they continue to do today ― and the garden flourished. Sadly, in August 2004, floods from Hurricane Ivan damaged the garden extensively. At the dedicated hands of staff, volunteers and donors, stream restoration began and the site was rebuilt.

In 2008, colorful interpretative signage was designed, fabricated and installed throughout the garden thanks to funding from the Southeastern Chapter of the American Rhododendron Society and the Vaseyi Chapter of the Azalea Society of America. More recently, the Arboretum established a series of plant labels implemented by New York Botanical Garden’s horticultural intern, Daniel Keltz.

The garden continues to be curated by natural landscape crew specialists Rich Ostenfeld and Sarah Briggs. Their work to maintain the garden, introduce new plantings, inventory the collection and establish seating has elevated the experience while visiting the collections.

Currently, the Arboretum’s National Native Azalea Collection garden contains 16 of the 17 species of United States’ native azaleas – all the eastern species are represented in the collection; the western species (Rhododendron occidentale) will not establish in the southeastern climate and soils. Eleven of these species can be found within 100 miles of The North Carolina Arboretum’s location. Hybrids and other cultivated varieties can also be found at the site.

The Collection has been fortunate to have been touched and impacted by so many over the past 30 years. With luck, dedication and the continued support and oversight from our staff, members, volunteers and donors, we hope the azaleas will continue to happily thrive there for many years to come.