The Extinction Question: Memories of a Conservationist

Perhaps no word in the lexicon of conservation is more powerful than “extinction.” It evokes images of skies once darkened with the flight of unnumbered passenger pigeons, now empty; of a grainy film from 1933 of the last Tasmanian tiger pacing in a dusty exhibit in a Hobart, Tasmania zoo; or a single Xerces blue butterfly guarding its territory on a California hillside for a mate that would never arrive. The rapid and sweeping changes humankind has brought to the world’s ecosystems have resulted in the endangerment of thousands of species of animals and plants, and this loss of biodiversity is a reason for concern and concerted conservation actions. But what should those actions be? I have spent my life as a conservation advocate grappling with that question.

My first encounter with endangered species was not squinting through binoculars, watching a peregrine falcon pierce through the skies, nor searching for grizzly bears in the Montana wilderness. (Although, I would later do both of these things as part of being a federal biologist.) Instead, it was as an undergraduate student at Virginia Tech that I had my epiphany. The creatures that would inspire my interest were neither feathered nor furred; they were humble clams, known as naiads or freshwater mussels, which I first encountered while knee-deep in the tumbling waters of the Clinch River in 1967.

The Clinch flows through the coal country of southwest Virginia and into Tennessee and the upper Tennessee Basin. Our study was to look at the impact of a coal-ash spill on the Clinch, where a settling pond adjacent to a power plant had released thousands of gallons of highly alkaline water and coal ash into the stream. Virtually every aquatic creature for miles was killed downstream from the spill. My job was to assist in collecting samples from sites above and below the spill.

Our first stop was a “reference site,” an undisturbed tributary of the Clinch called Copper Creek. It was a bright, late spring morning in the rugged Allegany Plateau. The trees and shrubs that shaded the stream were alive with chattering bird life—mostly vireos and warblers—and a northern water snake plopped into the stream as I waded in. I placed the sampler in the midst of a riffle and began to pull up rocks and gravel. To my amazement, I pulled up four embedded freshwater mussels from the gravel, each roughly the size of my fist. I asked the graduate student who was my supervisor what they were, and he replied that they were “Pleasantshells,” Actinonaias pectorosa.

“How does such a big clam get …way up here in the mountains?” I asked—one of which became a stream of questions that he never tired of answering.

“It is a complicated story, but essentially the female clams release tiny ‘baby clams’ that have specialized hooks to attach to fish. And not just any fish—a peculiar species of clam only hooks on to a peculiar species of fish, and the clams hitch a ride. Pretty cool, I’d say,” he said with a smile at my unbelieving eyes. 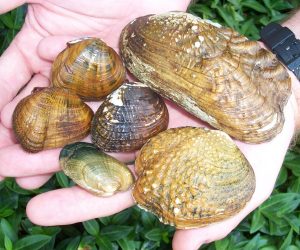 In the days and weeks that followed I became acquainted with a myriad of new creatures—muckets, elktoes, clubshells, spectaclecase, rabbitfoot, rainbows, combshells and heelspliters—the colorful folk names of freshwater mussels that evoked their color and form. I came to recognize the dozens of species that made me feel like I had stumbled into an outdoor aquatic zoo, as well as the reasons for their imperilment: Essentially, mussels die because they clean the water.

In subsequent trips back to the Clinch, we sampled the lower reaches of the river in Tennessee where the diversity of mussels and fish increased. At one site I found the shell of a recently dead mussel I did not recognize. I asked my supervisor John if he knew the shell. He held it in his hand, turning it over to see all its parts, “That’s called the acornshell, Epioblasma haysiana. That whole genus of mussels is in trouble. You might have just missed seeing one alive.” In fact, the acornshell was reported extinct by 1976; I had found the shell of a creature that would soon be lost forever.

It was 50 years ago since I first stepped into the Clinch River and met my first imperiled species. Since then, I have met and directed research on many more species of many kinds. But of the over 1,600 species that are listed as endangered or threatened in the United States under the Endangered Species Act, most are not well known by the public, and their biology is still not fully understood. 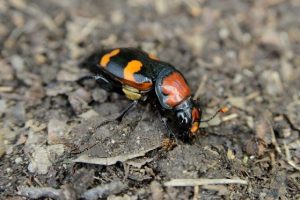 One example close to home is the American Burying Beetle, Nicrophous americanus (pictured here, courtesy of U.S. Fish and Wildlife Service), which was common throughout the eastern United States until the 1920s; the last specimen found in North Carolina was in Black Mountain in 1940. Since then, it has only been found on the fringes of the westernmost portion of its range, and the reasons for its decline are poorly known. 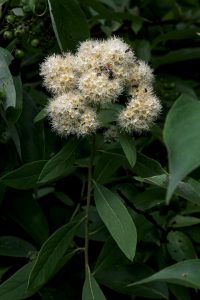 Another example is Virginia spiraea, Spiraea virginiana (pictured here, courtesy of U.S. Fish and Wildlife Service), a flowering shrub previously found throughout the Appalachian plateau and still extant in Western North Carolina. If you were to raft down the Nolichucky River you might see clumps of this species up to a couple of meters in height, but it is only known from a handful of locations throughout its former range. Its required habitat is frequently scoured banks on high gradient rivers like the Nolichucky and other rivers and streams in our region.

Finding funding and support for species like these that are less-known to both policymakers and the public remains a challenge. Critical research could continue, often for a tiny amount of funding, to keep these species from disappearing. The scientist who answered a question of “how is this species important?”, or “what are the benefits of this species?” in a legislative hearing with the honest reply of “we do not fully know” often runs into a dead end when it comes to support from lawmakers who fully know the political power of opponents of protecting biodiversity in favor of commercial gain.

But there is good news: Citizens are becoming more aware of the value of species diversity and their contribution to sustaining ecosystem services for society. Many also have come to value biodiversity, not just on practical grounds but for reasons moral and ethical. The fact is that if a species goes extinct, they cannot be replaced. In the words of Aldo Leopold, “the first rule of tinkering is to save all the parts.”

A working knowledge of the science of imperiled species is just one example of the value of science literacy. As we consider private decisions and public policy in areas such as health, education, conservation and climate change, scientific literacy has never been more important in our daily lives.

Rachel Muir is an environmental scientist and a scientist emeritus with the U.S. Geological Survey who resides in Arden, North Carolina. In her upcoming four-part online course at the Arboretum, “Endangered: Understanding the Biology and Conservation of Imperiled Species and Ecosystems,” she will offer the chance to dive deeper into the topics of endangered species biology, conservation, policy and law. The course will be conducted over Zoom on June 9, 11, 16 and 18 from 7:00 – 8:00 p.m.

Register for the course