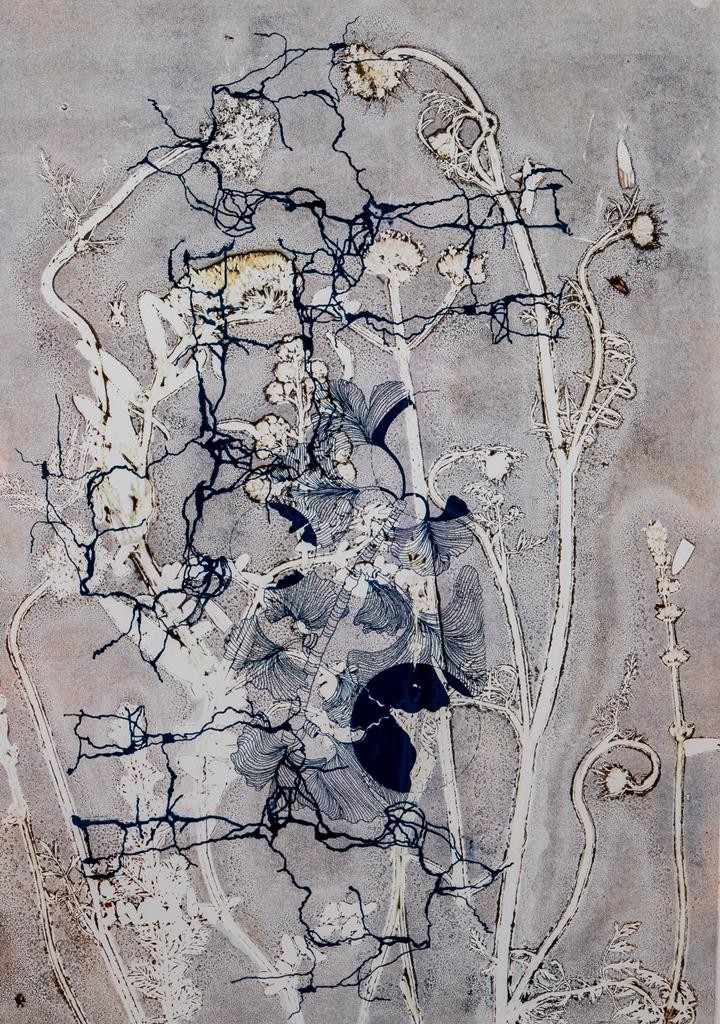 Prizewinning artist, writer and photographer Sandee Johnson has traveled the world mastering techniques including mixed media, acrylic, collage, pen and ink, encaustic, oil and cold wax, paper-making, printmaking, and altered photography. She is inspired by the joys of nature, environmental and political concerns, foreign culture, dance, and countless other visual feasts, and has exhibited in Paris, Moscow, Rome, Brussels, London, Budapest, Washington, D.C., New York City, Seattle, Geneva, Stockholm, Luxembourg, Shanghai, Tokyo, Seoul, Berlin, Sofia and many other countries. Her exhibit, Botanica: Botanical Monoprints, focuses on capturing the essence of botanical specimens using water based inks and an etching press to add each layer of the monoprint until it is rich with hidden details and impressions of nature.

As I capture the essence of botanical specimens using water based inks and an etching press, I add on to each layer of the monoprint until it is rich with hidden details and impressions of nature. While creating a monoprint, in addition to the juices and natural juices and dyes that are pressed into the printmaking paper, I often include detailed pen and ink drawings that I’ve been creating for the past fifteen years. These drawings are primarily imaginary plants that sometimes feature geometric shapes while others represent recognizable specimens. Ephemeral elements may be included in these botanical explorations, either as a chine-collé or collage. Chine-collé is a special technique used in printmaking in which an image is transferred to a surface that is bonded to a heavier support in the printing process. As a final step in my process, I use watercolors, colored pencils, ink, acrylics and/or fabric swatches to unify the desired design and effect. The creation of these botanical monoprints is a spiritual, playful process, and I hope you are transported through the seasons of time as you gaze upon them.