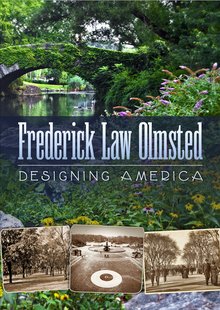 SOLD OUT. Due to the overwhelming popularity of this event, we are no longer accepting reservations at this time.

Join us for a special screening of the PBS documentary, “Frederick Law Olmsted: Designing America,” a co-production of WNED Buffalo/Toronto and Florentine Films/Hott Productions, Inc. The film will be introduced by Laurence Cotton, the principal researcher and consulting producer of the film. Following the screening, Cotton will present a short talk about Frederick Law Olmsted, Sr., his life and career, and the legacy of the Olmsted Brothers firm across the U.S. and Canada. Laurence Cotton is a writer, historian and filmmaker who studied cultural anthropology and film at Hampshire College. He began his career in the arenas of conflict resolution, international affairs and international humanitarian assistance, serving on the staff of Oxfam America, which is headquartered in Boston, and with several Harvard University affiliated foreign policy organizations. Cotton also made a foray into public radio, as an independent producer and as executive producer and host of the nationally syndicated show Cambridge Forum. In 1994, Cotton relocated to Oregon to serve as executive director of the World Affairs Council of Oregon. He has served on the boards of directors of many nonprofit organizations, including the Oregon State Park Foundation. Mr. Cotton has been associated with the production of numerous public television documentaries and he currently serves as a historical lecturer on board small ship cruises on the waterways of North America.

Space is limited and registration is required. Tickets to the event are free, however, donations to The North Carolina Arboretum Society are welcomed.

The Savory Thyme Cafe will also be serving its regular menu until 6:30 p.m. for those who wish to dine before the film.