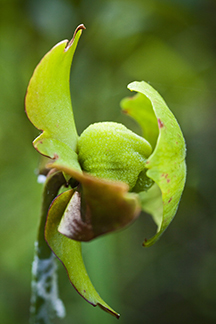 Southern Appalachian bogs are amongst the rarest natural communities in the region, providing vital services to people, including flood control and the filtration of pollutants that would otherwise enter our water supply. In North Carolina alone, bogs provide habitats for nearly 90 plant and animal species that are considered rare, and 17 bog species are either federally listed under the Endangered Species Act or are of conservation concern.

On display July 15 through October 1, 2017, from 9 a.m. to 5 p.m. daily, inside the Education Center, “A Year in the Life of a Mountain Bog” is the result of a yearlong photography project between photographer Michael Oppenheim and the Southern Blue Ridge Mountain Chapter of The Nature Conservancy. Over the course of four seasons, Michael captured the diverse native and non-native flora, amphibians, insects and fauna of a small bog located near Asheville, while also documenting The Nature Conservancy’s restoration efforts of the bog and related research-oriented projects. He has more than 22 years of experience working as a photographer in Seattle and Asheville focusing primarily on editorial, architectural, wedding and non-profit clients. He hopes that this exhibit will help shed light on the few remaining bogs in the Western North Carolina region and draw attention to these biologically-diverse communities that are increasingly coming under assault.