Fifty years ago this month, Apollo 11’s trip into space produced Neil Armstrong’s July 20, 1969, walk on the moon, along with historic awe-inspiring photographs of the moon, earth and the surrounding cosmos. In 1980, astrophysicist Carl Sagan brought the story of our cosmos to television. But long before then, a cosmos closer to home was a favorite among gardeners throughout the world. This summer the Arboretum is brimming with colorful cosmos, those simple, orderly-petaled flowers that you may remember from your grandmother’s garden or may even plant in your own.

Just where did this long-time favorite come from? 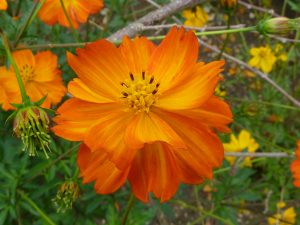 Cosmos is a member of the large Asteraceae (Greek for “star”) family that includes sunflowers, stevia, chicory, calendula and Echinacea. A native of southwest deserts and Mexico, cosmos owes its popularity to the Spanish priests who cultivated it in their mission gardens. They named the flower after the Greek word meaning “ordered universe in harmony” because of the blossom’s evenly spaced, simple petals.

How the flowers got from Mexico to the United States, however, was anything but simple. Seeds introduced to Spain by its explorers in the 1600s did well and the flowers flourished. They were planted at Versailles at the Petite Trianon and in England when the wife of the English ambassador to Spain brought seeds home in 1789. It wasn’t until the mid-1800s that the flower’s circuitous route landed it in the United States.

Today cosmos remain a popular choice for gardeners nationwide. There are 20 known species of cosmos, two of which are familiar to home gardeners — Cosmos sulphureus and Cosmos bipinnatus. How can you tell them apart? Cosmos sulphureus has small flat leaves and flowers that are shades of yellow, orange and red. C. bipinnatus has fern-like foliage and flowers that range from white to shades of pink and dark purple, like the flowers on display at the Arboretum. 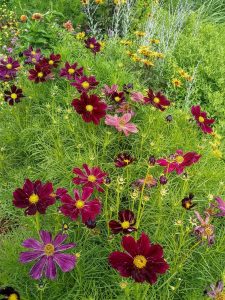 In moderate soil, these sun-loving flowers grow easily from seed and require little tending once they are established. Their wide range of colors, height and foliage make them well-suited to informal plantings with other members of the Asteraceae family that can thrive in summer’s heat and intermittent rain.

While strolling through the Arboretum’s many eye-catching gardens, take a moment to look for C. bipinnatus ‘Purple Shades,’ Sonata™ Series Cosmos, a new heavy flowering dwarf cosmos that features purple, fade-resistant flowers. When paired with zinnias, they quite literally cover the Arboretum in color from June through August.