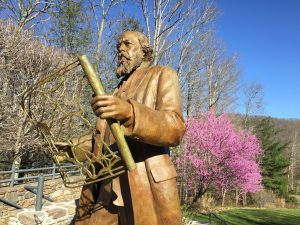 Known to many as the father of American landscape architecture, Frederick Law Olmsted’s (1822-1903) multifaceted career encompassed surveying, engineering, chemistry, journalism, economics, management, and farming. His early perspective on landscape design was formed after a six-month walking tour of the British Isles and Europe in 1850 where he crisscrossed the countryside and visited numerous parks and private estates. In 1858, Olmsted and Calvert Vaux, an accomplished English architect, won the design competition for New York City’s Central Park. This was Olmsted’s first professional design project and is thought by many as the foundation of landscape architecture as both a profession and fine art.

Olmsted and his firm completed more than 500 projects during his tenure, including designs for 40 academic institutions, dozens of public parks and parkways, landscapes at national monuments such as Yosemite and Niagara Falls, and the 1893 World’s Fair in Chicago. His final grand project led him to the mountains of western North Carolina during the late 1800s where he designed the landscape of the 125,000-acre Biltmore Estate for George Vanderbilt. Inspired by the rich, indigenous flora of the southern Appalachian Mountains, Olmsted sought to create the most comprehensive research arboretum in the country on the estate. Though his original plans for the arboretum never came to fruition, his vision served as an impetus for The North Carolina Arboretum in Asheville, established in 1986 by the North Carolina General Assembly.

Realizing a dream many years in the making, The North Carolina Arboretum unveiled to the public the first larger-than-life-size sculpture of Frederick Law Olmsted on April 22, 2016, as a way to pay tribute to Olmsted’s influence in landscape architecture in the United States. The bronze sculpture was crafted by internationally-known artist Zenos Frudakis, whose most recognized works include “Freedom” in Philadelphia, the Honor Guard sculpture at the U.S. Air Force Memorial in Arlington, Virginia, and the iconic Payne Stewart sculpture at the Pinehurst Resort in North Carolina.

The Olmsted sculpture has been placed in the Arboretum’s Blue Ridge Court, where background vistas of the Bent Creek Experimental Forest of the Pisgah National Forest, an area once owned by Vanderbilt, provide a fitting setting. The bronze piece stands eight feet tall and is sited on a large natural stone.